Fianna Fail Councillor, John Paul Feeley has welcomed confirmation that the former National School where Sean MacDiarmuida attended to learn Irish at Tullinamoyle, Dowra has been included in the Cavan County Council official programme for the 1916 Commemorations. “Earlier this year, I suggested to Tom Sullivan, County Librarian that the fact that Sean MacDiarmuida attended Tullinamoyle National School, just outside Dowra should be commemorated. The National Programme of Commemorations includes specific reference to the Irish Language and the Cultural Revival that occurred in the years proceeding the Rising. Tullinamoyle School falls perfectly into this heading: a signatory of the Proclamation and his efforts to learn Irish.’ Following approaches to the current owner of the property, the Council have agreed that a commemorative plague will be erected, informative signage about the general history of the now closed School and direction signage from the village of Dowra. ‘The school is in private ownership. It has been tasteful restored by the current owner, Karsten Konig, a German native, who brought the derelict property to its state as his home. Karsten has been most cooperative with the Council and the Council must now work closely with him to complete to put in place a tasteful monument.’ Welcoming the programme, Councillor Feeley confirmed that the plaque will be unveiled in March 2016. ‘The programme for the coming year is balanced and considered. Along with various ceremonies we will have a number of lectures, plays and other events looking, not just at the Rising but also the cultural, economic social and political background. A commemorative lecture on the Irish Language and Conradh na Gaeilge, which was very well organised in County Cavan at that time will be organised for Dowra to co-inside with the unveiling of the plague. The County Library will also engage in an Oral History project to gather the stories told locally about Sean MacDiarmuida as he attended Tullinamoyle and activities surrounding the Rising and the years of the War of Independence.’ Picture Cllr. John Paul Feeley at Tullinamoyle Former NS, Dowra, Co. CAvan ENDS 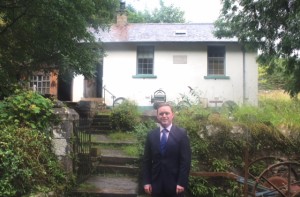