Fianna Fáil, Councillor, John Paul Feeley, John Paul Feeley stated that the record and interest of Sean MacDiarmada in the Irish Language and the cultural revival of which he and the leaders of 1916 were so heavily involved should be an inspiration to the current and future generations. ‘MacDiarmada came to Tullynamoyle to learn Gaeilge from a native speaker, Patrick McGauran who thought at the school. He attended night classes for over a year as it was not on the curriculum in Corracloona National School near his home. He also learned book-keeping in his time there. In proposing the installation of a plaque I thought it important that the role of Tullynamoyle in the formation of MacDiarmada particularly due to the fact that the Irish Language and the Cultural Revival were key inspirations to him.’ The commemorative plaque was unveiled at the former National School by Cllr. Fergal Curtin, Cathaoirleach of Cavan County Council. Signposts have been erected from the Dowra-Blacklion Road to the former School and along with the commemorative stone an information panel setting out details of the history of the school, its’ former teachers and pupils has been installed. ‘It was somewhat ironic to commemorate a 1916 leader at a National School given that Padraig Pearse has talked about the National School system established in 1832 as a ‘Murder Machine’ designed to form Irish Children into loyal British Subjects. A poem on the curriculum when MacDiarmada attended national school ‘I thank the blessings and the graces, which upon my youth has smiled, which has made me in these Christian Days a happy British Child.’ People like MacDiarmada, Pearse, Plunkett, Casement and the other leaders did not see themselves as a ‘a Happy British Child’ but rather embraced and led the cultural nationalism of the time through their interest and involvement in such movements as the GAA and the Gaelic League. The 1916 Leaders were very conscious of the importance of the language and of the need to revive and create a strong Irish identity. Pearse said ‘A nation should guard its language more that its territories – ‘tis a surer barrier, and more important frontier than fortress or river. He noted that thirteen of thirteen of the sixteen executed leaders of 1916 were members of Conradh na Gaeilge and six of the seven signatories spoke Gaeilge. In his last letter to his brothers and sisters he asked them to ensure that his nephews and nieces ‘learned the language and the history.’ Stating that we must look to the record of the 1916 leaders and see what new and innovative ways can be found to improve the use of the Irish Language and thus build on the legacy of MacDiarmada and the other leaders of 1916.’ ‘It is worth noting that the landscape moving from the shores of Upper Lough MacNean near which MacDiarmada was reared to the area around Tullynamoyle over looked Lough MacNean must have inspired him and that the region, which through the strong links of Tom Clarke with Carrigallen has provided two of the leading members of the Rising. ‘ ‘It was wonderful to see such a large crowd made up of local Councillors, Deputy Brendan Smith, former pupils, descendant of the aunt with whom MacDiarmada stayed during his time in Tullynamoyle, relations of former teachers including a niece and grand-niece of Patrick McGauran, the teacher during MacDiarmada’s time in the school. The local community took a great interest and pride in this event also.’ ‘The Cavan Ireland 2016 Committee organised a great programme of events. They have done a great job under the leadership of County Librarian, Tom Sullivan who played a huge role in organising the event at Tullynamoyle. His colleague, Martina Rooney did great work engaging with the local community and with the property owner, Karsten Koenig who facilitated the installation of the commemorative stone and information panel.’ ENDS John Paul Feeley County Councillor, Stranamorth, Blacklion, Co. Cavan Mob. (087) 6989304 Home (071)9853125 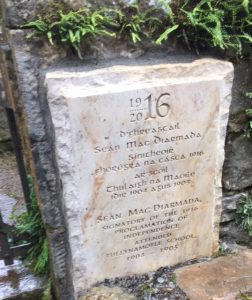 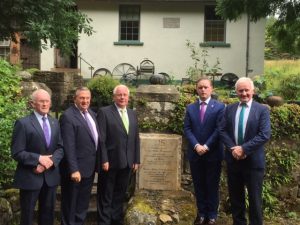 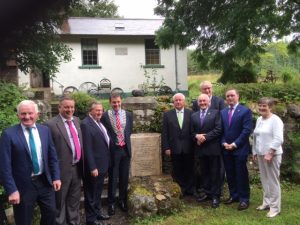