A € 916,000 investment in the Cavan Burren near Blacklion is coming to conclusion which will transform access to the key Cavan site in the UNESCO Marble Arch Geopark to all. Welcoming the completion of work, Fianna Fáil Councillor, John Paul Feeley has called for a sustained programme to promote the region and further enhance the tourism product in County Cavan. ‘The investment in the Cavan Burren has truly opened the site to all. A large portion of the 4.245 kilometres of waking trails through the forest are fully accessible for those in wheelchairs or buggies so this site is now ideal for those who have an interest in the archeology and geology of the region, biodiversity, wonderful scenery or simply wanting to ramble off road in safety in a pristine environment.’ The investment of € 916,000 allowed for the provision of an un-manned interpretative building of 160m2 together with a toilet block, carparking for 37 vehicles and 9 minibuses and a turning area and a substantial amount of signage. The contract was awarded to P & S Civil Works, Stradone and commenced in July 2013 sustaining twenty jobs during construction. ‘Funding for this project has been in the making for many years and was brought about as a result of close cooperation between Coilte Teoranta as the owners of the property and Cavan County Council who have reached agreement on a leasing arrangement for part of the site and for the on-going operation of the Cavan Burren. The bulk of the funding has come through the Special European Union Programmes Body (SEUPB) as part of the INTERREG IVA Border Uplands Project.’ Highlighting the partnership approach to this project, Councillor Feeley noted the work of the local community through Killinagh Community Council and in particular local historian, Harold Johnston. ‘Back in the 1980’s in a very dark time in a village like Blacklion, Killinagh Community Council and West Cavan Community Council set about the development of the Cavan Way in conjunction Cavan County Council, with a 16 mile walking route from Blacklion to Dowra linking many of the Burren sites to Moneygashel Cashel, the Shannon Pot and onwards to the first village on the Shannon, Dowra. Much has changed since that time. I don’t think anyone realised the full potential of the Cavan Burren at that time. In particular and in more recent years, the work of another local historian, Jim Nolan who has tirelessly gone through the Burren looking at site, seeking out rock-art, evidence of the pre-ice-age coral sea and other parts of the unique geology and archaeology that has built up the case for the huge investment that has now taken place and really given a glimpse of the huge significance of the site.’ The connection of the Cavan Burren with the Marble Arch Caves and a network of other sites in the region to form the first cross border Geopark has brought international recognition to the importance of the site and adding to the UNESCO designation. This designation puts the Cavan Burren and the sister sites on a different level and should form the basis for further investment and provide a catalyst for the development of significant tourism in the region. ‘This investment is, in my view but another step on the way. This project is yet another reason why the development of the old Sligo, Leitrim and Northern Counties (SLNCR) Railway from Sligo to Enniskillen must be re-opened as a greenway for walking and cycling. The Cavan Burren and many other Geopark sites being easily accessible from that route. As it stands there is evidence of a substantial increase in numbers visiting the area and this investment is intended to increase numbers by a further 15%.’ ‘On a personal level, I am hugely proud to see this project come to conclusion, Having worked closely with the local community and with officials from Cavan County Council, Coilte and elsewhere, I am very proud of the work done by all to bring this about.’ Finally, Councillor Feeley called for an immediate investment in improving road signage and in a detailed marketing plan for the Cavan Burren the flag-ship project for Cavan Tourism into the future. At the new Interpretative Building, carpark & toilet block with Jim Nolan At Tullygobbin Tomb with Cuilcagh Mountain in the background On one of the ‘bog-bridges’ which allows access to some of the more environmentally sensitive sites 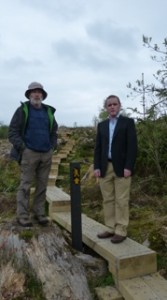